You are here: Home / Holidays / It’s Time for our Annual Leprechaun Lunch!

Folks all across the US will celebrate St. Patrick’s Day today by wearing green, drinking beer, parading in the streets, and proudly proclaiming, “Kiss me, I’m Irish” – whether they’re really Irish or not.

They’ll do all these things, despite the fact that St. Patrick’s official color is pale blue (not green), pubs in Ireland were forced to close on March 17 for many years (to discourage revelers from getting drunk during Lent), St. Paddy’s Day parades originated in Colonial America (not in Ireland), and even St. Patrick himself was not Irish (he was born in Britain and was taken as a young boy to Ireland in the 4th century by raiders who held him captive there for six years).

Our family has been celebrating St. Patrick’s Day for nearly thirty years now with an equally non sequitur tradition, something we call a “Leprechaun Lunch.” The menu varies from year to year, but the theme remains the same – everything’s green! 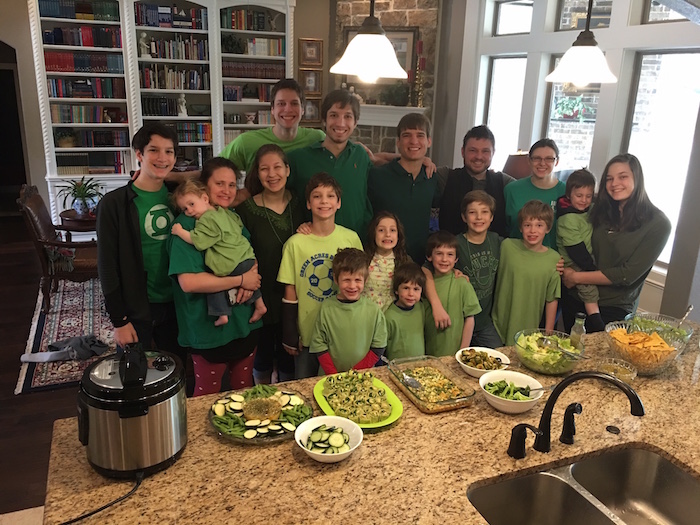 In the beginning, I served things like lime jello, guacamole, and clover-leaf cookies coated with green sugar sprinkles – not necessarily a well-balanced meal, I’ll admit. Over the years, the fare we prepare has gotten decidedly more healthful, since I’m one of those fortunate moms whose kids actually like eating their vegetables. Here’s what’s on the menu this year:

As you can see in the photo above, our celebration has grown over the years and now includes grandkids, too. Six more things you should know about this photo:

Recently, I walked into my bedroom to talk to my h