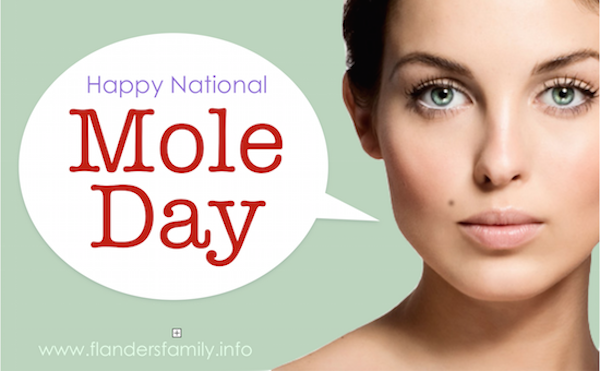 Yes, I know it’s the chemistry kind of moles we’re supposed to be celebrating today, not skin moles or ground moles — but I still thought now would be the perfect time to share this video of the funny, furry little creature my children found in our flower bed. Isn’t he fascinating?

[If you cannot see the video, click here to view it.]

But, of course, that’s not the kind of moles this day is all about. In chemistry, a mole refers to a basic unit of measurement based on Avogadro’s number, 6.02 x 10^23 (which is why it is traditionally celebrated on October 23, between the hours of 6:02 AM and 6:02 PM).

For a fascinating explanation of how Avogadro came up with this rather odd number, I suggest you watch this short but informative video from GetChemistryHelp.com:

To learn more about the furry kind of moles, visit a-z-animals.com.

And for more information on skin moles, and how to tell if they are cancerous, check out www.cancer.org .

My love for my husband increased exponentially onc

Look who got a superhero uniform for his birthday.

It took us two weeks to finish, but our Mandaloria

No visit to the French Quarter is complete without

Lunch at Gattuso’s in Gretna, LA. Great food at

Hello, there. My name is Jennifer, and I’m curre

These two guys have been volunteering at VBS all w

It’s amazing how much more the kids and I accomp