You are here: Home / Family Fun / Staying Cool at the Pool 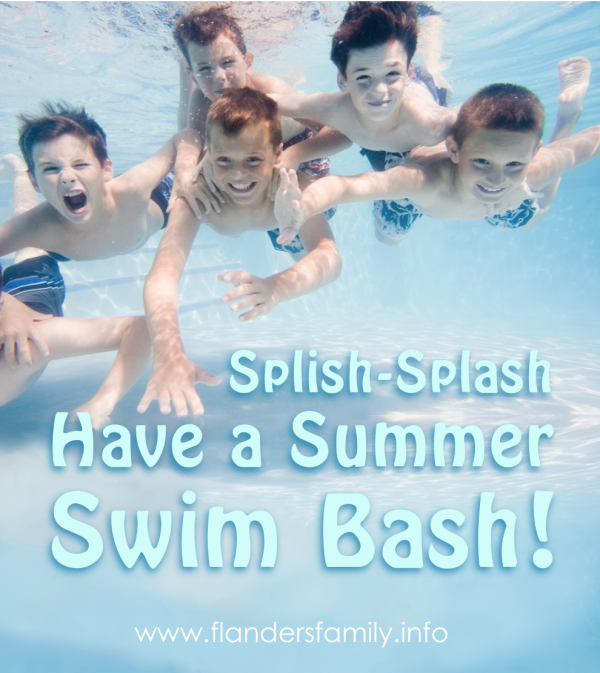 During the summertime, our family loves staying cool at the pool. We swim almost every night. Since we usually pack a picnic dinner to eat at the pool, kitchen clean up is a snap. After returning home fresh, clean, and relaxed, we all slip into our pajamas and gather for story time, then eat a quick snack before heading off to bed.

But summer is slipping away — it’s already August! That means only a few more weeks to enjoy our family’s favorite pool games:

Toss a few coins in the water, then encourage your kids to hunt until they find them.

When your children are little, you’ll want to play this game in the shallow end of the pool. It’s a sneaky way to get reluctant swimmers to put their face in the water, but it works!

Older children will enjoy playing this game in the five-foot end — especially if they get to keep the coins they find.

If you want to dive for treasure in water deeper than six feet, use diving rings or sticks instead of loose change. They’ll be easier to spot and grasp off the bottom.

Our children love playing “Sharks and Minnows” at the pool. It’s especially fun when we’re staying in a hotel, as those pools are normally small and seldom crowded.

To play, one person is selected to be a shark, and everybody else is a minnow. The shark gets out of the pool and stands at the edge with his back to the pool and his eyes closed, halfway between one end of the pool and the other.

Down in the water, the minnows line up on one wall and prepare to swim to the opposite wall when the shark says, “Go!” (Although they are not required to leave the wall immediately).

The shark waits until he thinks the minnows are getting close enough to catch, then turns around and jumps into the water. If, however, he turns around before any minnows have even left the wall, he must stay on dry ground, take one giant step away from the pool, and start over again.

Any minnows he catches are out. Unless you want to make it really challenging for the remaining players, in which case those caught become sharks, too, and must get out of the pool to give chase with the original shark in all subsequent rounds. The last uncaught minnow wins the game.

String a net across the pool and gather your family for a fun round of water volleyball. It’s best to have at least two or three players on each side, and use an inflatable beach ball to play (the bigger the better).

The differ slightly from normal volleyball: The game is played to 25 (must win by 2) points, the ball must be returned over the net within three hits, the same player may not hit it twice in succession, and once the serving team loses a point, the serve goes to the other side.

Unfortunately, the volleyball net at our community pool somehow got shredded this summer before we got a chance to play, but Doug and I and our six-year-old Gabriel did team up last week against some talented young teens for a three-on-three game of water basketball.

They won (but just barely).

To play Marco Polo, the player who is it (whom I’ll call Marco) chases all the other players in the pool, but he must keep his eyes closed to do it. Since he cannot see, he must guess at the other players’ positions by following their voices.

To facilitate this, every time Marco shouts “Marco,” everyone else must call, “Polo” (unless they are under water at the very instant he says it).

Players continue to answer “Polo” whenever they hear “Marco,” and Marco keeps following the sound of their voices (no peeking!) until he tags one of them.

The first one tagged becomes the new Marco, and the game continues in like fashion.

Front flips, back flips, gainers, and dives — our guys love trying to outdo one another on the diving board every summer. They really know how to put on a good show! The girls jump, too, but aren’t nearly as daring as Dad and the boys — although a couple of summers ago, I did learn to do a fairly decent backflip, thanks to my husband’s expert coaching.

Be sure to video your kids’ tricks off the diving board at least once a summer. They’ll enjoy critiquing their moves at home—seeing themselves in action can help them improve their performance.

To take it up a notch, float an inflatable swim ring below the board and see how many of the above moves you can do before landing in the center hole.

Looking for more fun things to do this summer? Check out our brand new collection of summer bucket lists.

Want more ways to encourage your children to be active — not only during the summer, but all year long? Then check out my new book, Get Up & Go. It’s cram-packed with fun ideas for getting fit as a family.