You are here: Home / Mailbag / Are Faith and Intelligence Incompatible?

The letter featured in this week’s Mailbag Monday comes from a comment I received over the weekend. The comment appeared on a post I published on my other blog called 5 Must-Read Books for Women Who Think. Despite the fact that I first published this list four years ago, it continues to drive traffic and inspire comments. Folks who agree wholeheartedly with what I’ve written seem eager to tell me so. Others, like the following reader, take serious exception to my strongly-held beliefs and don’t hesitate to let me know it.

Some people think my strongly-held religious beliefs disqualify me from participating in rational conversation. And they’d extend that argument to encompass all men and women of faith.

Women who think… will recognize your inability to think for yourself as soon as you mention your faith in a god. You can’t consider yourself a thinker and still be on that absurd train. Those aren’t your thoughts. They were given to you and you accepted them. Try being honest with yourself before condemning women who keep thinking beyond what they are given.

Response: Faith and intelligence are not mutually exclusive

I’ve received comments similar to this before, from people convinced that faith in God is a marker for low intelligence. Keep reading for my response to that line of reasoning.

I concede that my beliefs have been greatly influenced by external factors. My parents and teachers. My friends. Books I’ve read and schools I’ve attended. The life experiences I’ve amassed in my 52 years upon this earth. The era and culture in which I live. And a whole host of other environmental factors. All of these things have undeniably played a part in shaping my worldview. But it works both ways. If you imagine you’ve adopted your own views independent of any outside influence, you are deluding yourself.

the fact a belief has been adopted from an outside source does not automatically make it false. I believe that the Earth is round. And that George Washington was the first US president. I believe that the key of A Major has three sharps. And that light travels approximately 186,000 miles per second. And that the month of December has 31 days. I believe that the square of the hypotenuse of a right triangle is equal to the sum of the squares of the other two sides. The fact I didn’t figure any of these things out on my own does not negate the truth of such statements.

the notion that devout faith is incompatible with deep thought is arrogant and misinformed. Some of the greatest scientific thinkers in history were also extremely vocal about their belief in God: Galileo Galilei, Isaac Newton, Nicolaus Copernicus, Gregor Mendel, Johannes Kepler, Louis Pasteur, Michael Faraday, Robert Boyle, George Washington Carver, Blaise Pascal, Francis Bacon, and Francis Collins, to name just a few. Additionally, at least eight of the ten highest IQs in the world currently belong to people who are both highly intelligent and religious.

I am not trying to condemn anybody, least of all “women who keep thinking beyond what they are given.” All five of the books mentioned in this column were written by women who in fact have done exactly that. Rather than blindly accepting the propaganda taught in Women’s Studies courses on left-wing campuses from coast to coast, these authors identified the real agenda, examined the rotten fruit, and found the radical philosophy of modern feminism woefully lacking. I, too, am simply pointing out the natural consequences of embracing such a bankrupt movement. You are free to disagree with our conclusions. But rather than launching an ad hominem attack on our collective mental capacity for believing as we do, why don’t you explain why you consider “rampant venereal disease and abortion, escalating rates of single motherhood and the abject poverty that it fosters, and coin-toss marriage survival rates” trends worth defending?

Want to read the original article in its entirety? Or add your own thoughts to the discussion? Then follow this link” 5 Must-Read Book for Women Who Think. 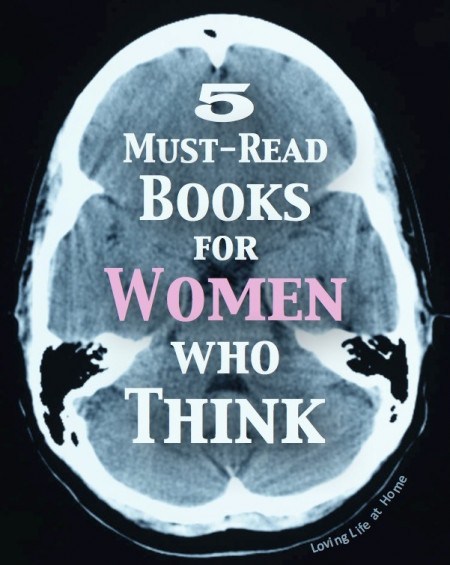