You are here: Home / Mailbag / Q&A: How Can I Get My Baby to Sleep thru the Night?

I’ve enjoyed reading your posts. I have a question on how to get my 1 year old to sleep through the night. She wakes up at least 4 times minimum. I’ve thought about letting her cry, but that might wake up her 2 older brothers. They just transitioned to sleeping through the night themselves before they turned one. Any advice would be greatly appreciated! 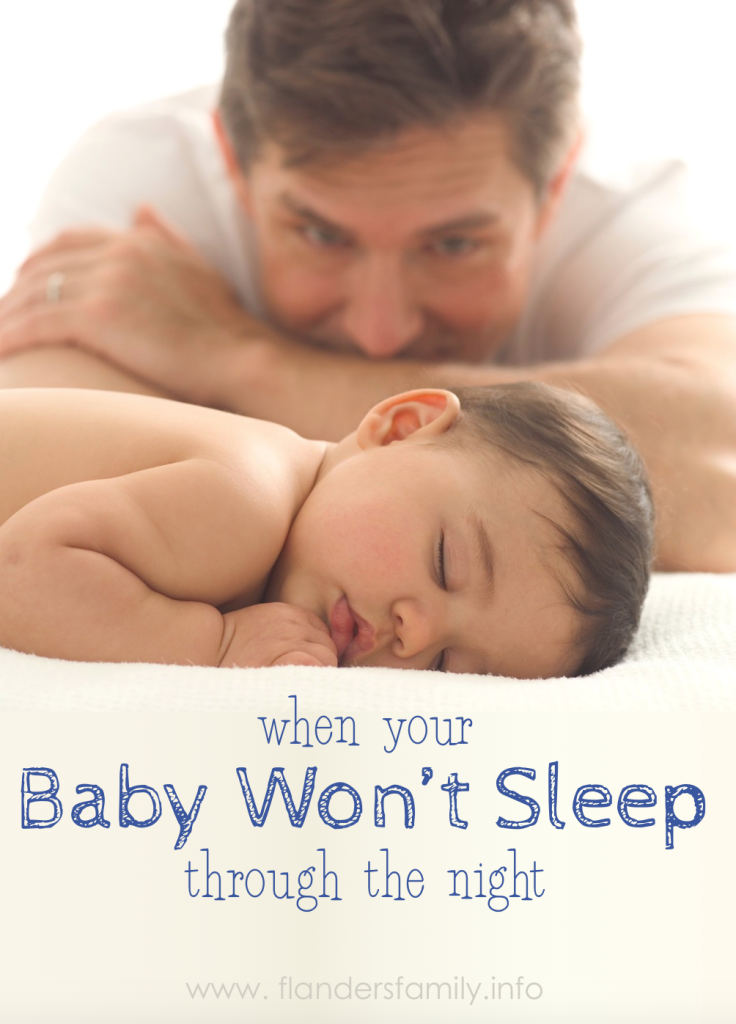 If you want to know how to get your baby to sleep through the night, you’d probably better ask somebody besides me. I have a really bad track record in that department. If my memory serves me right, only two of our twelve slept consistently through the night before their second (and for some, third or fourth) birthday.

I held my first baby almost constantly because I didn’t know any better, he preferred to be held, and I enjoyed the novelty of having my very own baby in my very own arms. I got really good at doing things one handed, with a baby on my hip — cooking, cleaning, grocery shopping, you name it. He only slept in his crib long enough for me to get pregnant with #2.

When my second was born (16 months later), I knew I was going to have to change my strategy, so I read up on getting a baby to sleep through the night. I had lots of friends who’d used sleep training methods with great success, but I failed miserably.

That’s because our second baby was extremely colicky. She cried inconsolably from 7-12 every night for four solid months, and intermittently after that. Some might say that if I’d left her in her crib to cry it out, she’d have eventually learned to console herself and developed a better sleep schedule. Maybe so, but that’s not what my mother’s gut told me — so I ended up holding her, too. At four months, we finally determined that the dairy products I was consuming were contributing to her colic. She stopped crying so much after that, but still didn’t sleep well.

Then #3 came along, and he slept six hours a night, almost as soon as we got him home from the hospital. He almost never cried, even when he had good reason to do so.

Which goes to show, all babies are different. If you want to train yours to sleep through the night, by all means give it a try (refer to the links below for detailed directions on how to do it).

My daughter-in-law is a firm believer in scheduling her babies and has successfully taught all six of my grandsons to sleep through the night using strategies like the ones outlined in those links, but if your baby doesn’t cooperate for some reason, don’t let it make you feel like a failure.

I know you’re concerned about the baby waking your sons up with her crying, but if the training works, their sleep will likely be disturbed for only a few nights. If all your children share a room, you might even consider letting the boys sleep on the couch for a few nights until the baby’s sleep schedule is better established. Otherwise, your reluctance to disturb their rest may short-circuit your attempts to train her.

On the other hand, if your primary goal is to keep the baby quiet so that everybody else in the family can sleep, then you have definitely come to the right place. Since my husband is an anesthesiologist whose patients depend on him to keep them alive through surgery, it has always been of paramount importance to me that he gets adequate sleep at night, to ensure he is alert and well-rested at work. So I’m an old pro at keeping babies quiet — and can provide lots of suggestions toward that end, including:

I know those last two tips are big no-no’s on a lot of lists, but co-sleeping and demand-feeding were the only ways I got any rest at all when my babies were little, so that’s my go-to advice for mamas who wish to go that route. The rest of those tips were only used when I was really desperate, like when #2 had colic or when #10 got thrush while we were living in the bachelor barracks at Fort Bliss and didn’t want to wake the soldiers who were sharing very thin walls with us.

(Incidentally, I once overheard my husband bragging that our tenth baby was sleeping through the night at two weeks. In reality, he was still waking up three or four times a night to nurse, but was so quiet about it that his father’s sleep was seldom disturbed. Proof that these methods do work!)

Over the years, as we added more and more children to our family, my attitudes toward midnight feedings changed. Whereas in the beginning I viewed disrupted sleep as a hassle, I eventually came to look forward to those times spent alone with my baby in the wee morning hours when the house was quiet and the rest of the family was asleep. I haven’t had any babies waking me up in the middle of the night for several years, and I still miss that stage.

Several of our children are now adults — and they are wonderful people in every way, so the constant holding/co-sleeping/demand-feeding obviously didn’t spoil them, despite all the warnings to the contrary that I received as a young mother. And my nieces and nephews and grandchildren whose mothers did things “the right way” are all turning out splendid, as well. Whether the fact they slept on a schedule as babies has anything to do with that outcome, I can’t say — but “crying it out” a few times does not appear to have set any of them back at all. 🙂

So… if you are exhausted and desperate for rest and convinced that your family would do better on a decent sleep schedule, by all means go for it. Here are some good articles to get you started, from somebody far more experienced in that sort of thing than I:

But if waking up four times a night with a nursing baby is no big deal for you, and you can still function the next day without feeling too crabby or spent, and your husband and sons have a hard time going back to sleep once they’ve been woken up, and you rather enjoy getting to spend one-on-one time with your daughter in the middle of the night, then don’t feel obligated to let your little one cry it out just because your best friend or great aunt or mother-in-law said that’s what your should do.

Trust your instincts on this one and do what makes the most sense in your situation. If raising twelve children has taught me anything, it that there is no one right answer when it comes to getting a baby to sleep through the night.

I’ve published lots of prayer guides on my websi

We made it all the way to church last week before

“Our struggle is not against flesh and blood, bu

Big thanks to Ben and Mik for making our snow day

One of the best time-investments you can make in 2

If the events of this past week haven’t convince

My lovely daughter posted this song on her private

Are you facing a seemingly impossible situation? R

We had glorious weather for an impromptu trip to N