You are here: Home / Organization / Scrapbook Shortcuts: Getting Organized

This post is the third in a series devoted to Scrapbooking Shortcuts. To read the first two, follow these links: Introduction: Making Scrapbooks for Multiple Children and First Things First: 4 Steps to Getting Started. Then check back tomorrow and throughout the coming weeks for more installments. 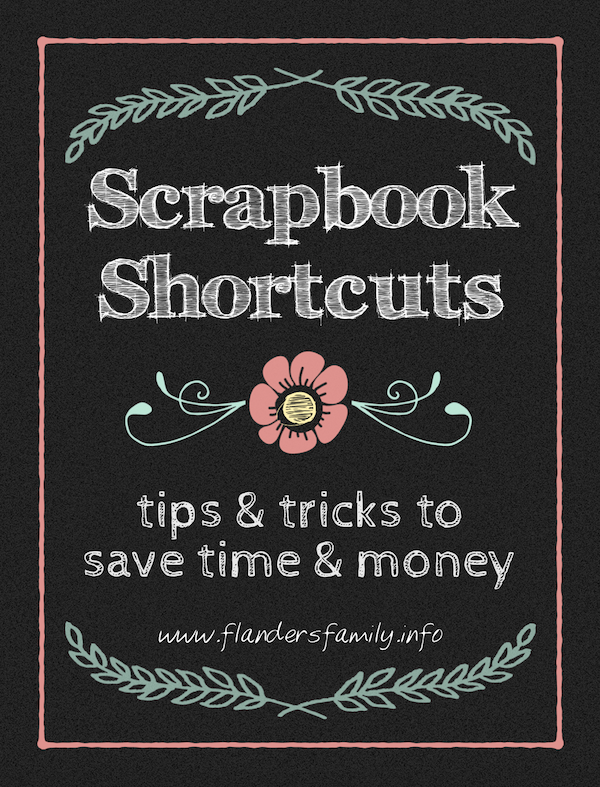 A friend of mine gave me a scrapbook when I was pregnant with my first baby. Later, another friend warned me that whatever I did for the first, I should make sure I continued for the babies that followed.

The second friend was speaking from experience. As the oldest of seven, he had all sorts of baby books and remembrances preserved from his childhood. His youngest sibling, by contrast, had two grainy school photos stuffed in an envelope — and that’s it.

So… a gift and a warning. That’s all it took to get the ball rolling on my scrapbooking career.

When it comes to organizing my memory books, I like to put things in chronological order. That’s the method that makes most sense to me, but it certainly isn’t the only way to do things.

If you’re starting this journey when you have only one tiny baby, getting organized will be a less daunting task than if you have several teenagers for whom you’ve saved every scrap and school paper and are just now deciding to put them in order.

But the process will be the same either way.

Here’s the box of photos and keepsakes I’m sorting through this weekend: 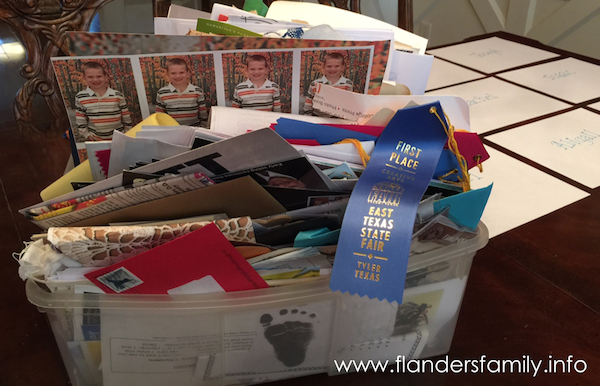 I was fairly caught up on all my scrapbooking when we moved four years ago, but I’ve fallen considerably behind since then. Four years, times as many kids as we still had at home when we moved, plus the book I keep for Mom and Dad, puts me about forty-four years behind!

Not to worry, though. My method will help me get this whole box sorted in no time (give or take a couple of hours). I just need a flat surface to work on, like my dining room table.

To go from box to scrapbook, I recommend doing all your sorting in stages:

If everybody’s photos and keepsakes are all mixed together (like mine are from the past few years), the first order of business is to separate them by owner. To do this, I make a stack for each child. Starting with each child’s name written on a full-size sheet of paper, I lay them out in order of age, oldest to youngest (although in this photo I goofed and put Abby before Gabbers, even though she’s my baby): 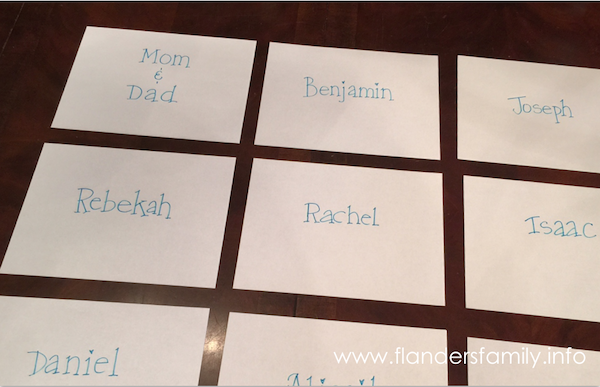 I then go through the box of mementos piece by piece, placing each keepsake in the stack of the person to whom it belongs: 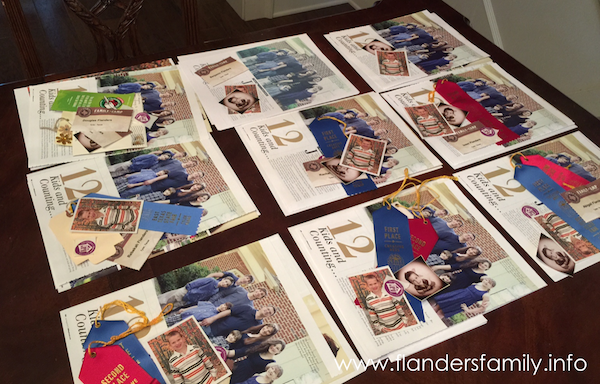 If you have as many years’ worth of photos and scraps as I do right now, you might opt to label boxes, one per child, and sort directly into those. That will keep the stacks from toppling if they get too high, and will also keep everything looking neat while your are working on this project.

You may even decide to stop after this initial round of sorting, and store each child’s mementos in these memory boxes permanently. As I’ve mentioned before, that’s the organizational system my mom used, and it worked just fine.

If you decide to keep going, the second step is to get everything in chronological order.

To do this, you will work with only one child’s keepsakes at a time. 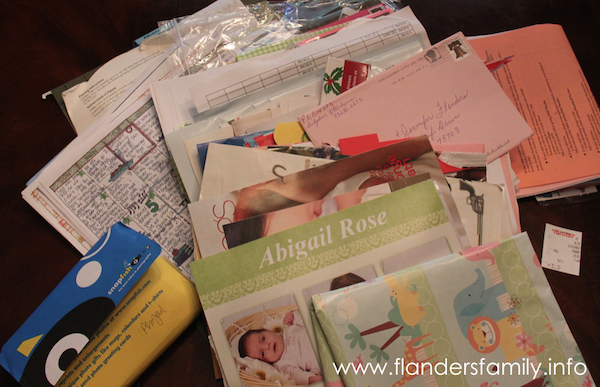 If those keepsakes span only a few months, proceed to the next step, but if they represent several years (or even decades) of memories, then you’ll need to sort them by year. 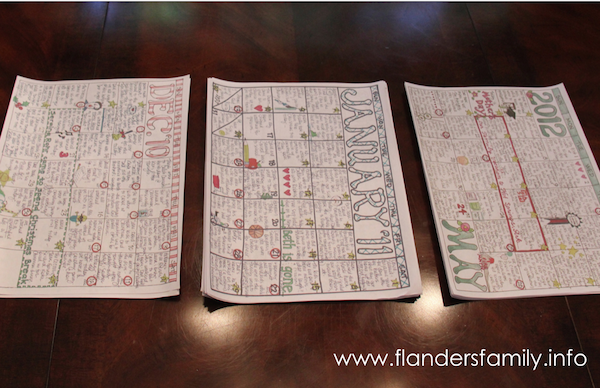 When you finish this stage, put each year/stage into a manilla envelope and label accordingly. This will keep things sorted until you can get it all glued into the scrapbooks.

If you decide you’d like to stop after this step, just punch holes in the side of each envelope and store them in a three ring binder. You can easily add envelopes for each successive year.

The main problem I see with stopping after Step 2 is that if a child isn’t careful about looking through the contents of only one envelope at time, he can quickly undo all the hard work you put into getting things organized.

So I take a year at a time and divide it into months, then glue those photos and mementos immediately into that child’s scrapbook in chronological order. I complete one year before moving onto the next, and certainly before moving on to another child’s keepsakes. 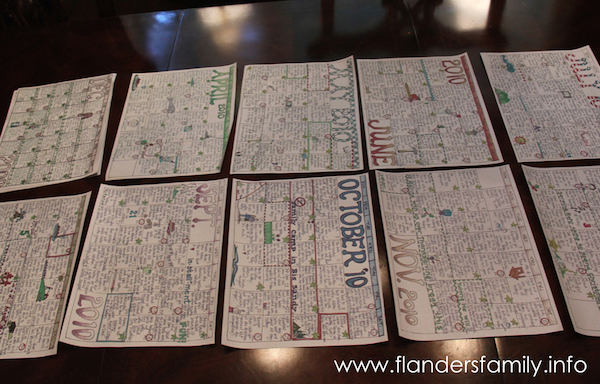 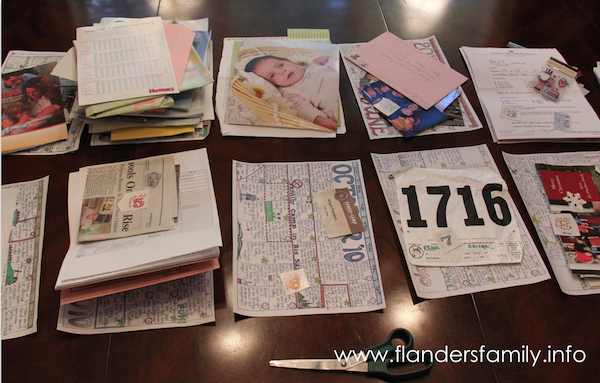 Now, that is probably enough to keep you busy for a while. Tomorrow we will briefly discuss scrapbooking supplies with a post of the tools I consider my bare essentials, then next week we’ll start talking about cropping photos, designing pages, and laying everything out in a way that is attractive and makes sense (without requiring a lot of time or money).

Until then, happy organizing!