You are here: Home / Babies / Babies in Medical School 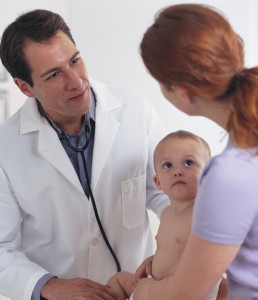 Hello Flanders Family!
I would love to seek your wisdom on a particular subject. My husband is a first-year medical student, and we are considering having children while he is in medical school. We would deeply value any advice you have time to share.
Thanks and love,
A Sister in Christ

We’re happy to share our perspective on having babies during medical school: We had three while Doug was in school, two more during residency, then another six (so far) once he began his practice. Was it ever a struggle? Yes, at times — especially financially, since Doug was committed to my staying home with the children, and having them early meant taking out bigger loans while he was in school. Would we do it all over again? Absolutely! We are profoundly grateful that God overruled our half-hearted attempt to use natural family planning to postpone pregnancy until after Doug completed his training (a plan which was quickly abandoned when I got pregnant two weeks into our honeymoon).

You see, the problem with waiting for “the perfect time” to have a baby is that it becomes easier and easier to find reasons to postpone (we’ll just wait until I graduate/ finish residency/ get established/ build a house) — and harder and harder to conceive once “the perfect time” arrives. That’s because a woman has just a small window of fertile years — a window which begins to close in her twenties. By thirty, she has only a 20% chance of getting pregnant each month. By forty, those odds drop to 5%.

But there are other benefits to having babies while you’re young…. For one thing, younger moms have an easier time keeping up with active toddlers. Raising children is hard work — best do it while your energy levels are still pretty high. For another thing, starting your family early is good for your health. Mothers who give birth at a young age have a lower incidence of both breast cancer and ovarian cancer. Studies also show that men who father children live longer, especially if they begin while they’re still young.

Having children is also good for your marriage. It will mature you both in more ways than you can imagine. It cements your love and seals your commitment to one another. Watching my husband interact with our chldren has given me a whole new respect for him by bringing to light character qualities which would otherwise have remained unrecognized and unappreciated. With divorce rates topping 50% in the general population and even higher among certain medical specialties, it is interesting to note that your risk of divorce decreases 20% for every child you have. The wedding ring on your husband’s finger may not keep those cute little nurses from flirting with him, but two or three (or eleven!) baby pictures in his wallet will sure slow them down.

Although conventional wisdom may tell you that medical school is hard enough without throwing dirty diapers and midnight feedings into the mix, Doug and I found that making babies was a great stress-reliever for him, and nursing them was a terrific stress-reducer for me! And of course, we shouldn’t forget the most obvious reason of all for starting your family ASAP: Babies are WONDERFUL. So are toddlers, adolescents, teens, and adult children (and grandchildren!) God really knew what He was talking about when He declared, “Children are a blessing from the Lord…. Happy is the man whose quiver is full of them.” (Psalm 127)

We hope some of this will help you come to a consensus on the matter. Let us know when #1 is on the way!