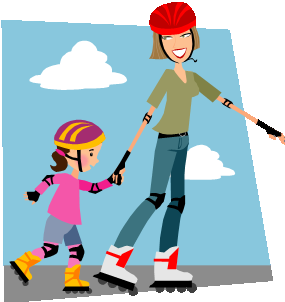 Raising a family of any size is a lot of work, but it’s seldom dull. The chores themselves can be quite enjoyable when done together with happy hearts. Younger children are especially eager to work, and they take pride in helping. If you cultivate this attitude in your little ones, you will still have cheerful workers when they grow older.

That said, there’s more to life than jobs and chores, and our family believes in regularly enjoying healthy doses of fun and games. We try to choose activities that all of us can enjoy, like listening to Dad read aloud, riding bikes around the neighborhood, playing a round of four-square in the driveway, staging arm-wrestling competitions, eating picnic dinners in the tree fort, or working jig-saw puzzles at the kitchen table. Some of our favorite family games are ones our kids invented themselves. We’ve included rules for these, along with other favorites below.

The Family that Plays Together Stays Together… Give These Ideas a Try Tonight!

Spoons: This is a card game all ages can enjoy. Players sit around a table. Place a pile of spoons in the center of the table equal to one less than the number of players beginning the game. The person at the head of the table shuffles the deck, then deals four cards to each player, including himself. He then places the stack of remaining cards in front of himself, draws one card, examines it and decides whether to pass it on to the next player, or to exchange it for one of the four cards in his hand and pass the discarded card to the player on his right, then immediately draws a new card and quickly goes through the process again. Meanwhile, the next player takes whichever card is passed and makes a similar choice, then passes a card to the player on his right. Discarded cards continue to fly around the table in this fashion until one player manages to collect four of a kind, at which point he grabs a spoon from the center of the table. As soon as the first spoon is thus claimed, the other players scramble to grab a spoon, as well. The player left without a spoon is out of the game, one of the remaining spoons is removed from the center pile, and players begin a new round. Each subsequent round will have one fewer spoon and one fewer player. The last player left in the final game wins.

The Hat Game: Every player except the hat holder is given a small slip of paper on which he or she writes a word or phrase without anyone else seeing. Papers are then folded in half and collected dropped into the hat. Any player too young to write can whisper a word or phrase to the hat holder who will record it on the little one’s slip of paper. Once all slips are collected, the hat holder reads each paper aloud. Beginning with the winner of the previous game, the players then take turns guessing who wrote what. If the first guess is right, that player gets another guess and the person he correctly identified as the author of a particular word or phrase is out. If he guesses wrong, the person he misidentified gets to guess. Players who are out can help advise the guesser, but players who are still in cannot. The last player in the game (the one nobody was able to correctly match with his word or phrase) wins the game and gets to be first guesser in the next round.

Zombie Tree Tag: One person is “the zombie”. He counts to fifteen and gives chase to everybody else. Anyone he tags becomes a “zombie” and joins him in tagging others. All trees serve as bases, but only for fifteen seconds at a time. Zombies must back 15 feet away from any player on a tree. Each player gets three trees per game (or one tree three times). When you are out of trees (and surrounded by zombies), you are out of luck. Last one tagged is the winner and serves as the first zombie for the next game.

Swing Tag: For this game, you need a fairly narrow swingset (with space for about three swings). Designate a base on either side of the swingset, out of the swings’ reach (we use the brick wall of our house on one side and the fence on the other). Toss all but the center swing up out of the way. One person gets in the remaining swing (this works better if he hooks the swing under his arms and across the belly, rather than sitting in it, and he must stay in the swing through the entire game). Everybody else gets on the same base. When the person in the swing yells “go”, players must run underneath the swingset and get to the other base without being tagged by the person in the swing. The first person to make it safely to the other base counts to 30. Anybody not on the new base by the time he finishes the count is out. Anybody who gets tagged while running across is also out. Last person left in wins, and gets to be in the swing for the next game. If the entire group of players makes it from one base to the other three times in a row without anybody being tagged, a new “it” is selected and the game begins again.

Octopus Tag: Everybody except one mobile “it” lines up on one side of the yard or field. When the “it” yells “go”, players run to the opposite side of the yard. Anybody tagged on the way across becomes a stationary “it”. Those tagged must remain rooted to the spot where they were tagged while trying to help the mobile “it” tag others on their next trip across the yard. End zones are safe, but the field between eventually becomes a maze of stationary “its”, so it takes great skill to get across without being tagged. Last one tagged gets to be the mobile “it” for the next game.