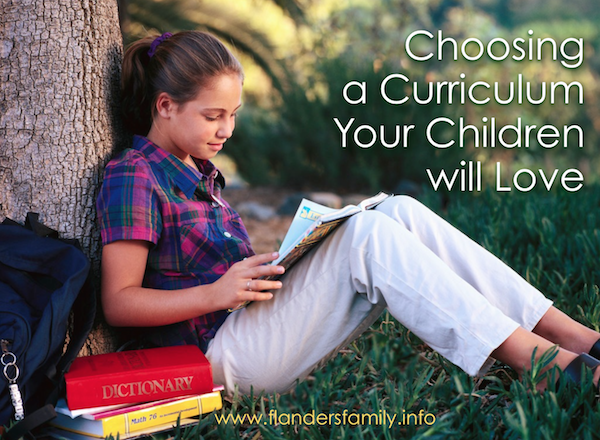 Deciding upon a curriculum can be a daunting task, as there are so many different programs available.

Whether you do research online or attend a book fair or pick the brains of a seasoned homeschooler, it’s important to choose books that fit both the learning style of your students as well as your own personality as their teacher. Below is a list of our family’s favorite time-tested resources, along with the reasons we like them.

One word of caution: If you’ve already found a program that works well for your family, stick with it. That’s not to say that the programs you haven’t tried aren’t great or that you shouldn’t switch if what you’re using isn’t working at a particular stage or age, but you’ll waste a tremendous amount of time, money, and energy if you abandon your current curriculum every time a new one hits the market.

I’ve published lots of prayer guides on my websi

We made it all the way to church last week before

“Our struggle is not against flesh and blood, bu

Big thanks to Ben and Mik for making our snow day

One of the best time-investments you can make in 2

If the events of this past week haven’t convince

My lovely daughter posted this song on her private

Are you facing a seemingly impossible situation? R

We had glorious weather for an impromptu trip to N