You are here: Home / Book Reviews / Story by Robert McKee 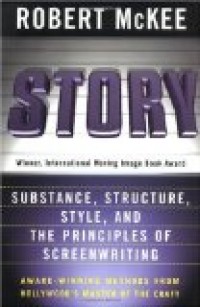 Story: Substance, Structure, Style and The Principles of Screenwriting

You might expect that a 480-page book would include some extraneous material, but my husband assures me this one doesn’t. Every paragraph of STORY is packed with invaluable advice intended for screenwriters, but profitable for writers of any genre. Students of the author, Robert McKee, have gone on to write, direct, and produce some of the most popular and critically acclaimed films of all time. Doug originally bought the Kindle version and read the entire thing on his iPhone. Then he immediately bought a hard copy and began reading it through a second time, only this time he is taking notes and memorizing the best parts, which may take a while, since as I mentioned before, he thinks all 480 pages are equally superb.

We ate at the Keeter Center at College of the Ozar